Dozens of articles about healthy eating claim that health benefits of wheatgrass are so numerous everyone should be eating it. However, can you really believe these claims?

Considering the popularity of this particular food, it seems that the articles are indeed true, for if it were useless, there wouldn’t be so many people testifying to its efficiency. Those who argue wheatgrass’ healing powers cite lack of scientific evidence as the main proof of their claims.

It’s true that there isn’t much research into this particular matter, but the same can be said about any kind of plant used in alternative medicine. Yet, many of them have proven efficient for treatment and prevention of various diseases and even professional doctors often prescribe supplements today.

In addition, there are currently a few studies underway that investigate wheatgrass health benefits in relation to specific diseases. Early research indicates that consuming freshly squeezed juice from this plant has a pronounced effect on one’s health, especially if treatment is prolonged and consistent. Therefore, even though the scientific evidence in regards to the healing properties of wheatgrass is insufficient at the moment, this situation can change in the nearest future. Considering the number of people who include this food in their diet and their positive testimonials about its efficiency, it’s safe to say that wheatgrass can be exceptionally good for you, so you should definitely give it a try. 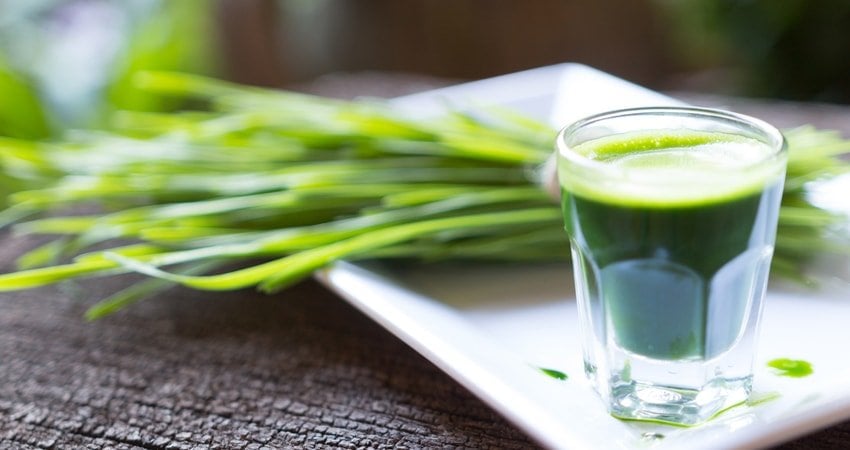 What Does Wheatgrass Do? 5 Essential Health Benefits of Wheatgrass

Now that we’ve determined that this plant does have some healing powers, we’ll need to answer the most important question. What is wheatgrass good for?

The most important wheatgrass health benefits are:

Note that it’s not only wheatgrass that’s good for your health. Wheat berries health benefits are just as numerous, so you definitely won’t regret stocking up on some wheat seeds. 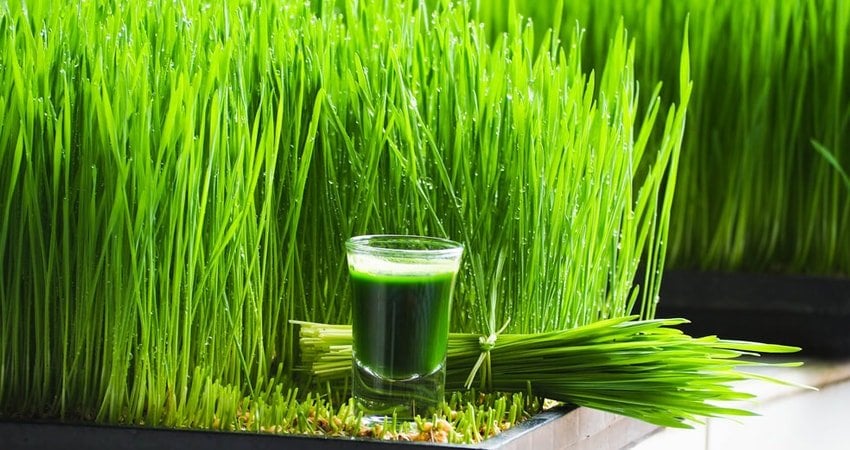 Side Effects of Wheatgrass

While scientists still argue about the health benefits of wheatgrass, they agree on the fact that it doesn’t have any known side effects. The risk of developing an allergy to the plant is minimal. As long as it’s taken in reasonable food amounts, you are in no danger.

Studies also indicate that creams made from this plant are also safe and rarely cause irritation. Even if it does occur, the chance is that it’s caused by other components in the cream.

In some very rare cases, drinking wheatgrass juice can result in nausea and loss of appetite. However, this is likely caused by the fact that it should be taken on an empty stomach early in the morning. Consider drinking juice at a different time. 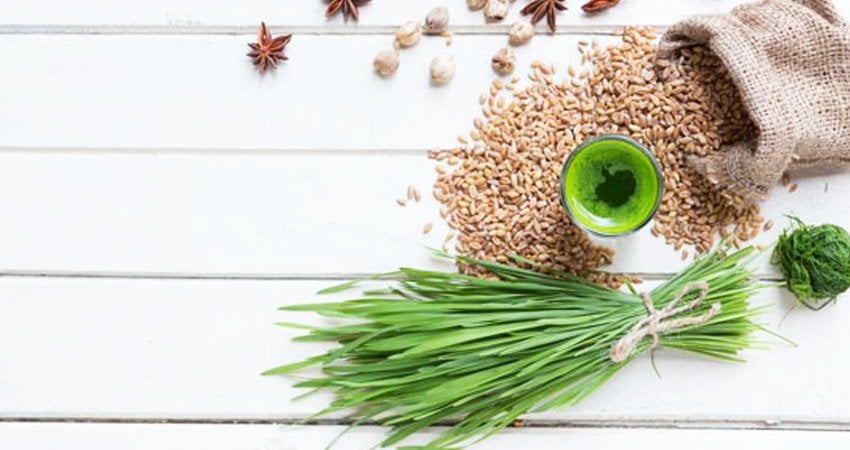 Does Wheatgrass Have Gluten?

This is a valid concern as the number of people suffering from gluten intolerance is increasing rapidly. Wheatgrass has been researched extensively and the US Department of Agriculture as well as the American Association of Cereal Chemists agree that only the seed kernel and endosperm contain gluten. The leaves and stems of the plant are completely gluten-free. Therefore, they are safe for those allergic to this substance. 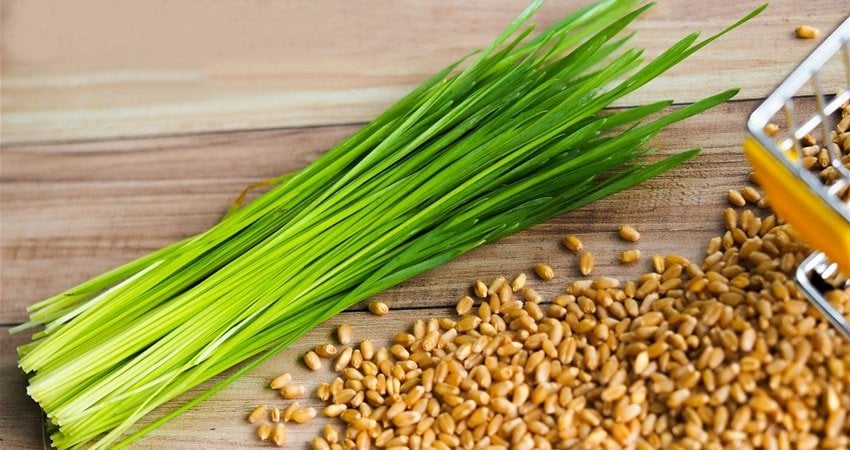 Where Can I Buy Wheatgrass?

As wheatgrass is a popular superfood, you can buy it in many stores that specialize in healthy eating. However, it’s important to understand that this particular food comes in many forms. Nowadays, you can buy wheatgrass juice powder, juice, seeds for sprouting, and frozen or fresh shots of the grass. 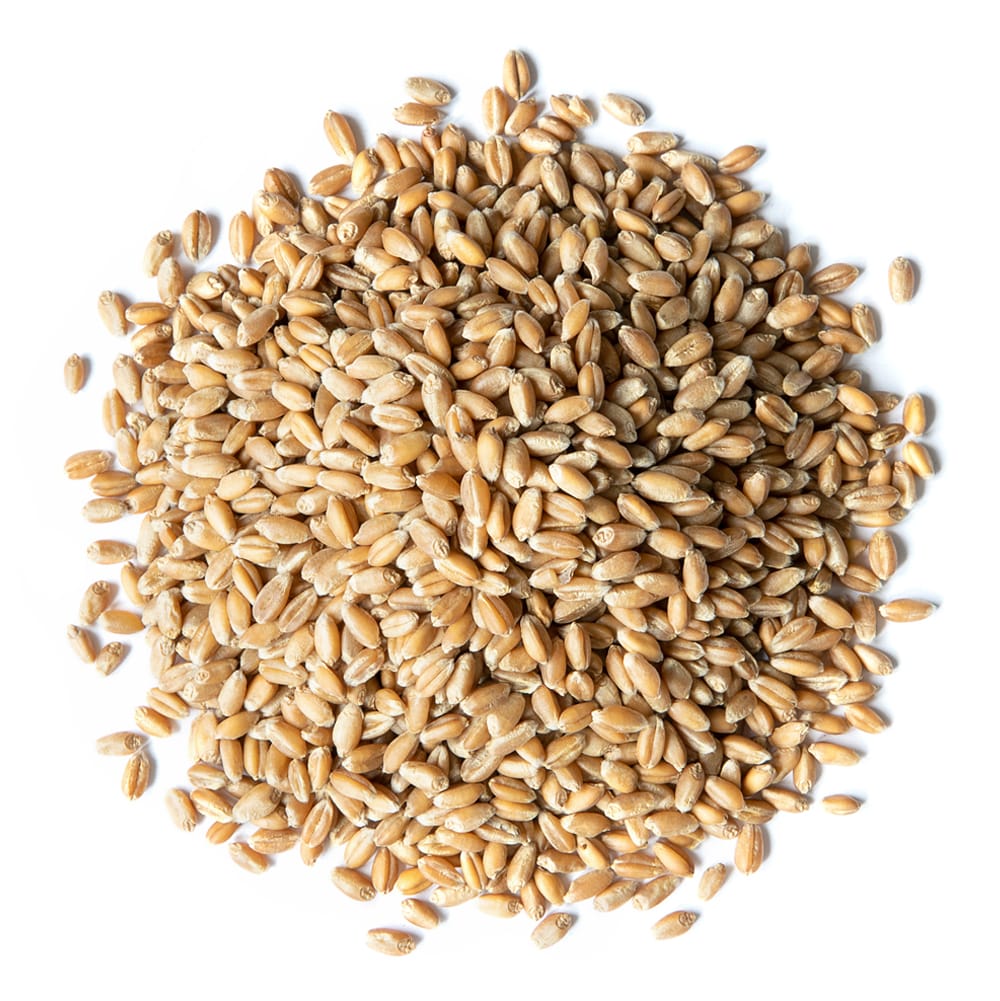 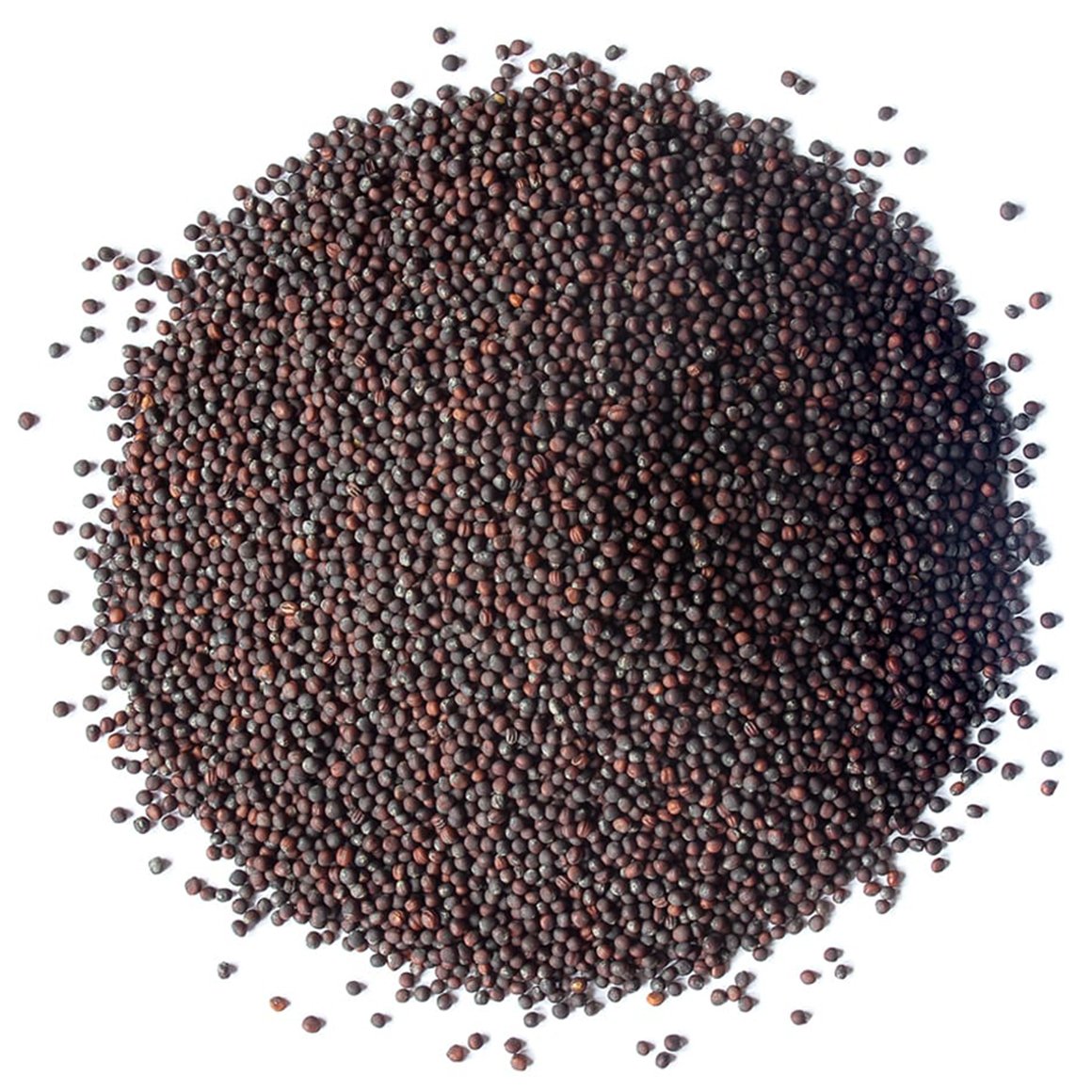 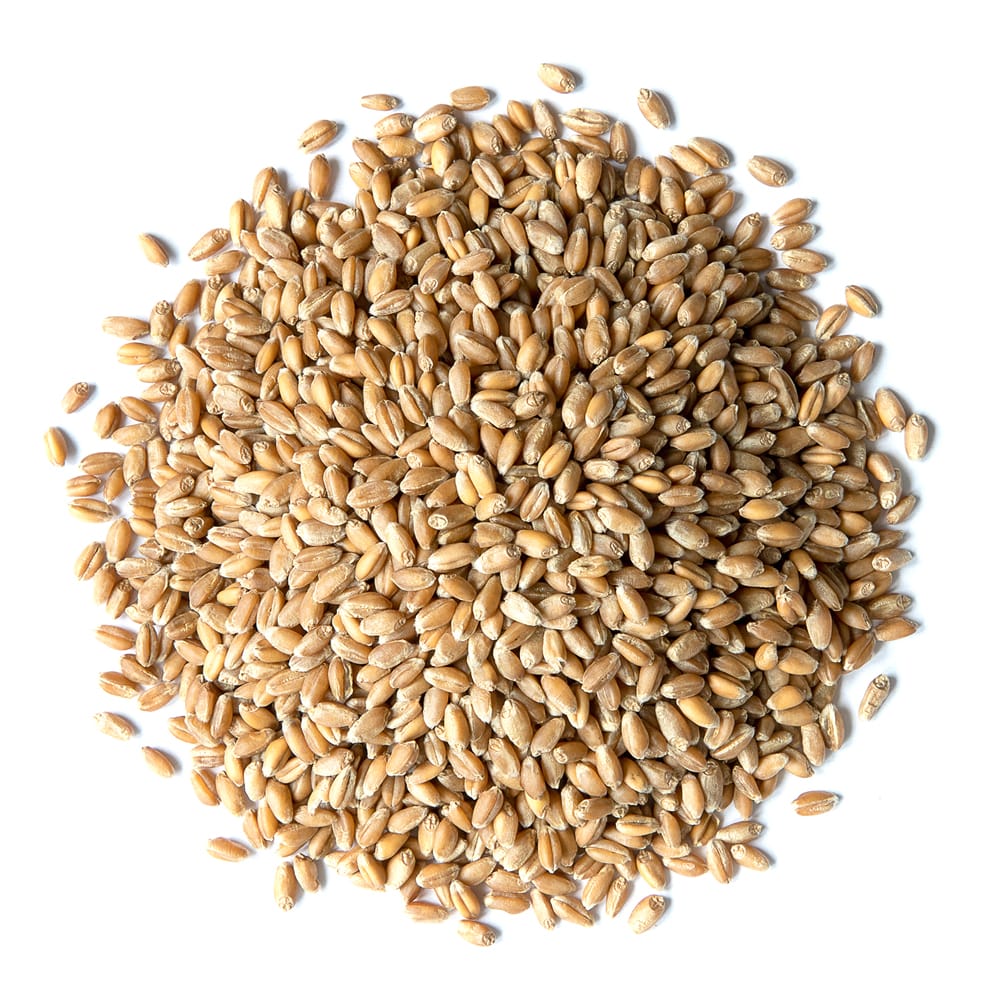 If you want to receive maximum health benefits of wheatgrass, you should buy seeds and sprout them yourself. All the studies of this plant investigated the effect of freshly-made juice. Its efficiency reduces significantly with every passing minute, so to get the most out of it, you should drink it no later than 15 minutes after extraction.

There are both regular and organic wheatgrass available in the stores today. Like with any other food, the organic variety is of a higher quality as it doesn’t contain any pesticides and other unsavory elements often used in farming. If you aim for the healthiest diet, you should choose this option. 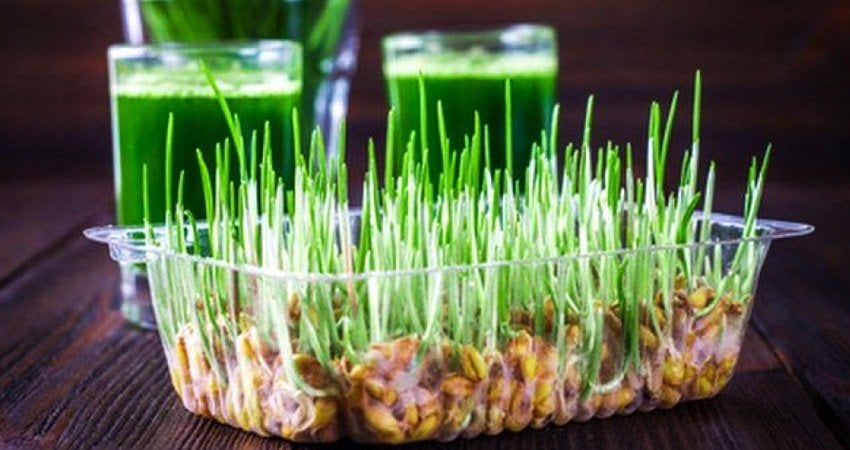 How to Grow Wheatgrass at Home

Growing wheatgrass indoors is very easy. If you have specialized sprouting equipment, you can use it, but there is no need to invest in it if you don’t. A regular tray and a couple of bowls is all you need to create a small grassy patch on your windowsill. This is how you should go about it: 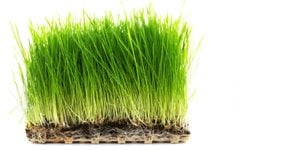 Wheat Sprouts: Health Benefits and How to Grow Them 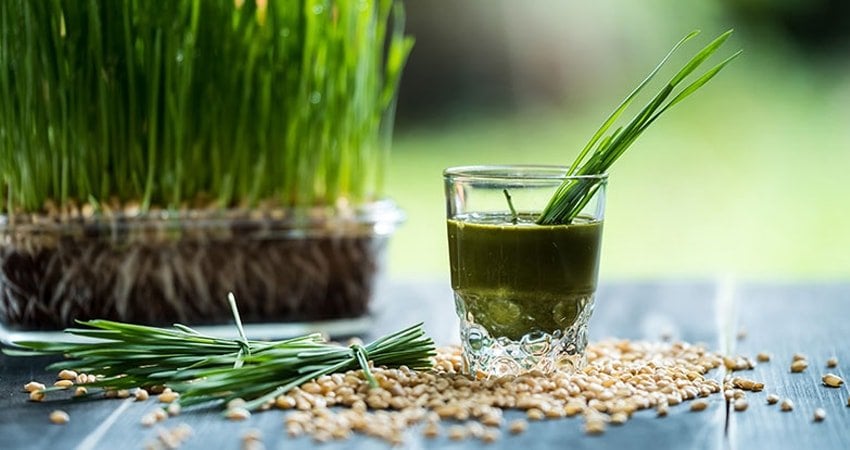 How to Make Wheatgrass Juice

There are several ways to juice wheatgrass. The most efficient is to use an electric or manual wheatgrass juicer. In this case, the machine will do all the work, so you’ll only need to add some water and a few drops of lemon juice to make your green medicine taste better.

If you don’t have a juicer, you can use a mortar and pestle, though this will require more time and effort. Fill about ¼ of the mortar with grass blades and grind them thoroughly. Then, add an equal part of water and continue mashing the content of the mortar into a paste. Once you are done, put the paste into a muslin cloth and twist squeezing the juice. 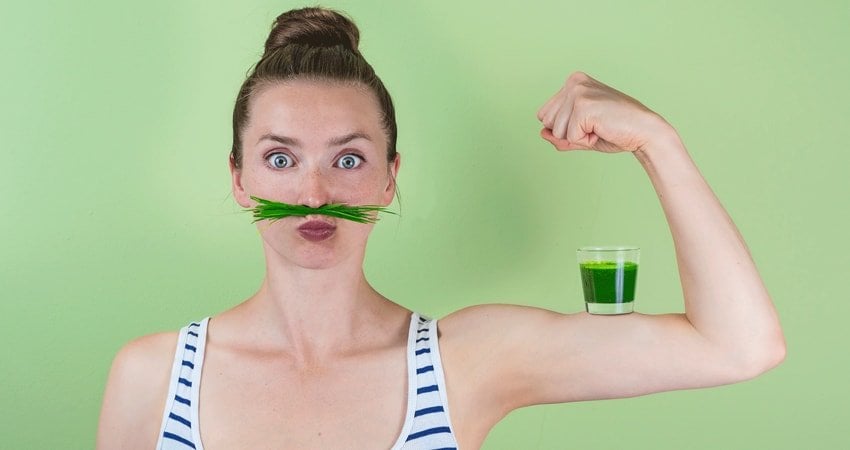 So, Is Wheatgrass Good for You?

As you can see, research and numerous testimonials from people consuming this plant regularly clearly indicate that it is indeed good for you. There may not be much scientific evidence present at the moment, but it’s impossible to argue that health benefits of wheatgrass are real.

Considering the fact that there are no known side effects to it, there really is no reason for you not to try including wheatgrass in your diet and seeing what it can do for you. This is especially true if you suffer from anemia or digestive disorders. 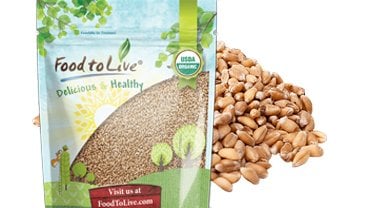 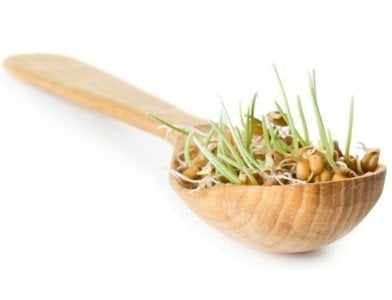